The IP Litigation team at Edwin Coe has recently acted for clients on a couple of successful actions in the High Court. In this guide we look at the first, in which we acted for the successful respondent Aiwa Corporation (Corporation) in an appeal from the UK Intellectual Property Office (UKIPO) to the High Court before Mr Justice Mann.

Certain trade marks owned by Aiwa Co Ltd (Limited) were revoked, and the judgment is interesting because it deals primarily with the issue of whether the sale of second-hand goods under Limited’s “AIWA” trade marks (the Marks) amounted to “genuine use” to save them from revocation for non-use.

The Marks were registered in relation to a range of goods and services including electronic goods, and were formerly owned by Sony Corporation (Sony), but there had been no retail sales of new goods under the Marks since 2008. In 2017 Limited was set up in order to “reestablish” the brand after acquiring the Marks from Sony. Corporation filed its own application to register an Aiwa trade mark in July 2017 and Limited opposed the registration based on its earlier registered marks. Corporation then commenced revocation proceedings based on non-use of the Marks for a five year period, and relied on the same non-use as standing in the way of the opposition under section 6A of the Trade Marks Act 1994

In the UKIPO, the hearing officer concluded that no genuine use of the Marks with the consent of the owner had been shown in respect of any of the claimed goods and services so far as second-hand sales were concerned. It is generally acknowledged that, in certain circumstances, second-hand sales may be sufficient for a finding of genuine use. In The London Taxi Corporation Ltd v Frazer-Nash Research Ltd [2016] FSR 579, sales of second hand London taxis by the proprietor were assumed to amount to “genuine use” although it was accepted that it is a difficult question of law.

There were some technical arguments relating to the grounds of appeal but for present purposes, Limited appealed on the basis that the hearing officer erred in making a simple unreasoned finding that there was no relevant use with the consent of the proprietor. It said there was consent to genuine use, when one looks at the facts and law properly.

The appeal can be broken down into two main points:

Use with the consent of the proprietor
Mr Justice Mann considered in detail what amounted to “consent”. It was agreed and accepted by both parties that Sony had not given its express consent to the second hand sales of AIWA products identified in the evidence. The Judge accepted that implied consent would be sufficient under The Sunrider Corp v OHIM (Case T-203/02). Limited argued that when Sony put the AIWAbranded goods on the market in the UK, even though Sony’s rights were exhausted by that first sale, it did not matter because there was implied consent to onward sales, and amounted to genuine use in relation to subsequent second-hand sales. The doctrine of exhaustion of rights provides that where goods have been put on the market under a trade mark in a member state of the EEA by the proprietor or with its consent, the trade mark does not entitle the proprietor to prohibit its use. Essentially, the proprietor’s rights are exhausted once the goods are put on the market.

Corporation argued that what Limited was talking about, at best, was deemed consent and that this was not good enough in the present circumstances. Corporation relied on the well-known Zino Davidoff v A & G Imports case (Joined cases C-414/99 to C-416/99) in which it was held that consent had to be “unequivocally demonstrated”, although it could be implied where the circumstances justified it. However, silence does not amount to implied consent.

“Consent is relevant to the arising of the “exhaustion” of the rights. It is what gives rise to it. It does not play a part in defining the lawful quality of user thereafter. Once exhaustion has happened, the proprietor cannot complain about infringements of his marks in relation to goods to which his marks are properly applied not because he is taken to have consented to that use, but because he has no more rights in relation to those goods – his rights are exhausted (a concept used in the headings though not in the bodies of the legislative provisions). The provisions are not phrased in terms of consent – they are phrased in terms of not being able to claim infringement or not being able to prohibit the use of the mark.”

Accordingly, the argument that there is supposed consent arising from putting goods on the market in the first place was insufficient. There was no consent in this case.

Genuine Use
In spite of this finding, Mr Justice Mann went on to consider the question of genuine use in this context and set out the principles established by the case law. In summary, genuine use means more than merely token actual use of the trade mark by the proprietor or by a third party with authority to use the mark. The use must be consistent with the essential function of the trade mark which is to guarantee the identity of the origin of the goods, and the use must be by way of real commercial exploitation of the mark – essentially to create or maintain a share in the market for the goods in issue. The use of the mark need not always be quantitatively significant to be “genuine”. Minimal use may qualify if it is deemed to be justified for creating or preserving a market.

It was accepted that the appearance of the AIWA trade mark on second-hand goods was capable of performing that part of the function of a trade mark which involves distinguishing goods originating from Sony from other goods. This point was picked up in the London Taxi case in which the judge said:

“To my mind, the key consideration is the nature of the activity relied upon. Even assuming that the sales of used vehicles constituted use of the [trade mark], this simply amounted to recirculation of goods which had already been put on the market under the trade mark long beforehand. Moreover, the average price achieved was a fraction of the price of a new taxi at the time (in the region of £30,000). This did not helpto create or maintain a share of the market for vehicles bearing the trade mark. On the contrary, production of those vehicles had long since ceased and been superseded by the production of later models. Moreover, even the sales of used vehicles dried up.”

Whilst the present case is fairly typical of the sort of situation in which it could be argued that the sale of second-hand goods might amount to genuine use, it was impossible to come to a general conclusion. Here, as in London Taxi, it was held that there was no genuine use. The judge was keen to avoid the situation where any second-hand sale amounts to genuine use of a trade mark without further factual analysis.

Limited’s problem was that the evidence of second-hand sales was thin. There was no direct evidence of any sales at all during the relevant 5 year period. There was evidence of various types of goods being advertised on Amazon and Ebay, and others on undated Ebay searches, but none of those advertisements can be related to actual sales or marketing in the relevant period.

Limited’s President provided evidence that he was aware of shops in various EU countries offering spare parts for Aiwa-branded products, and produced some printouts claiming to prove such use.

In Ansul BV v Ajax Brandbeveiliging BV [2003] RPC 40 the Court of Justice of the EU held that aftersales services such as the sale of accessories or parts in respect of the goods could amount to genuine use of the actual goods as well as after-sales servicing and repair even if the goods themselves were no longer available. However in the case at hand, it was held that that evidence of aftercare and the limited second hand sales put forward by Limited did not meet the relevant test because it did not clearly demonstrate advertisement in the relevant periods, and there were hardly any Aiwa-branded spares shown on the sites.

On the face of it, when an Aiwa branded product is sold on the second-hand market, the trade mark is capable of designating the owner of the trade mark because it is still an “AIWA” product. However, this supposition is too simplistic for legal purposes, and an investigation in relation to the factual matrix is required in order to determine whether such use is attributable to the owner. The court in the present case confirmed the age-old position on trade mark exhaustion and found that Limited / Sony had not consented to the ongoing sales. This meant that Limited’s case was holed beneath the waterline because it had to rely on its own genuine use, and the evidence of that was scant. 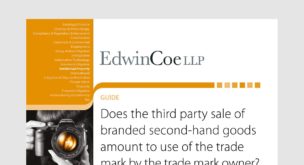 Does the third party sale of branded second-h...